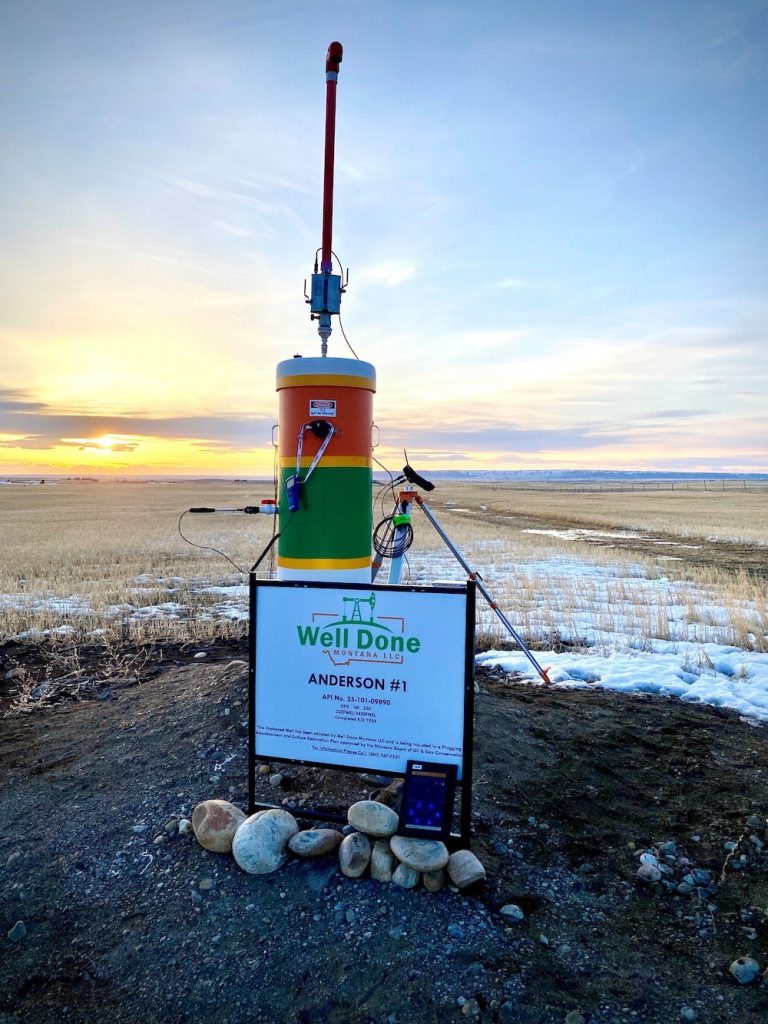 Commemorated by the Plugging of Anderson #1, Toole County’s Oldest Orphaned Oil, and Funded by Pacific Steel & Recycling, the April 22 Kickoff will Include Events Throughout the Day in Shelby, MT

This initiative will kick-off on Earth Day (April 22) and marks the one-year anniversary of the Well Done Foundation’s history-making plugging of the Big West Anderson #3 Orphan Well, which took place on Earth Day 2020.

The Plug 21 initiative is the largest plugging and reclamation project the WDF has taken on in its crusade to fight climate change “one well at a time” since the NGO’s inception in 2020. Great Falls, MT-based Pacific Steel & Recycling, a WDF partner since last year, will fund the plugging of Anderson #1, the oldest orphaned oil well in Toole County, to kick-off the campaign.

“We will plug the Anderson #1 well on Earth Day, thanks to the generous funding provided by Pacific Steel & Recycling,” Shuck said. “Pacific has reclaimed and recycled more than 21 tons of scrap metal from WDF sites in Toole County and was the first to purchase Well Done Climate Benefit Units (carbon offsets). The company continues to be an amazing project partner and sustainable industry leader.”

Later in the day on April 22, the WDF will host a community event at its visitors’ center in Shelby, which will include executives from Pacific, Toole County dignitaries and members of the news media.

“Pacific is pleased to participate in sponsoring Anderson #1, which was first drilled in 1924,” said Kirby Farner, Pacific’s health, safety, environmental and transportation director. “This effort is good for the environment, Well Done, Pacific and the community at large.”

Plug 21’s kickoff follows on the heels of WDF’s recent carbon-offset partnership with Calgary-based Radicle, which helps finance and complete the plugging of the 30 orphaned wells, while creating a template to expand the WDF model to a much larger scale—expanding into Kansas, Texas, Colorado, California, Pennsylvania, New York and West Virginia.

The “Well Done Process” is a multi-step initiative built upon public and private partnerships: the Well Done Foundation identifies a high-emitting orphaned and abandoned oil or gas well and qualifies it through a rigorous measurement and monitoring regiment, bonds it with the regulatory body, and then launches a campaign to raise funds to plug the well and restore the impacted surface areas. Working closely with the surface landowners, WDF develops a “plugging plan” and obtains a permit from the state for the project.

Next, it identifies and designates an “adoptive family” for the orphaned and abandoned well (either a corporate or individual benefactor), selects a team for the downhole and surface work, and executes the project to successful completion.

Radicle specializes in supporting organizations like WDF, and over 3,000 others, to monetize their environmental efforts. In this project, Radicle has been supporting WDF in the development of a carbon offset methodology through the American Carbon Registry (ACR)’s program to create a pathway to monetization for the reduction in emissions.

Formed in 2019, the Well Done Foundation enables the oil and gas industry to partner with the conservation community to create an alternative pathway to success that benefits all. The Well Done Process creates a strategic partnership among regulators, surface owners and adoptive parties, leading to a safe and seamless system that provides cost-effective and lasting results that improve the environment while working with the industry in a transparent structure that delivers value to its triple bottom line: community partnerships (people), environmental responsibility (planet), and economic benefits (vitality). Montana’s Golden Triangle Region is home to some of the richest soil and most productive growing acres in the United States. The Well Done Foundation works with its partners to transition the orphaned well sites into their next levels of service. For more information, visit https://welldonefoundation.com/.